So much has happened since I moved to the property…

I decided after writing my book ‘Blonde Roots’ that I needed to have a change… a change of scenery perhaps. The book had taken so much out of me. Even though it was cathartic to write my journey triumphing over sexual, physical and mental abuse, to be able to release the hurts and the pains I had kept in for many years, I some how felt a little empty inside… as if by releasing all my past hurt and all the pain should of made me feel more alive and free. Well it did, and I am so happy that I released all of those past hurts… I feel like a new woman. By letting go I learnt to love myself. A love I now want to share with others. The thing is not knowing where to from here. How does one fill the hole… the emptiness in the stomach from leaving the old me in the book. I’ve never felt this way before.

So moving ahead a couple of months

I sold almost all of my belongings… things… stuff and only kept my personal things and stuff that my youngest daughter and I would need. Then we hit the road. What a wonderful journey it was, seeing the countryside change as we drove further and further west. Boy they needed rain out here. We had just moved from a house near the beach with a swimming pool and now we were entering the country where every drop of water counts… no more long showers, no more swimming in the crystal clear pool. What had I just done?

My daughter Jannali was excited even though leaving her safe environment was not easy. Leaving her friends, her school, other family members to live in a very different environment, one of isolation, one where the closest neighbours are 15klms away, one where the closest little town was 46klms away… with no friends and no real school. How would she cope? Well it has taken some time, but she is finally settling in to school (Long distance Education) as the nearest High School is 140klms away. So this is it. She misses her friends, she misses the city, but she has learnt that things happen differently out here… no spending hours on the computer, but spending time being taught how to feed a potty calf, how to help with chores, how to light a fire to start the pot belly to keep warm… most of these lessons could not happen in the city. She has days where the call of the city has her in tears, where the friendships she once had has her heart aching and longing for those days of fun and laughter with people her own age.

My eldest daughter was out here when we arrived, she turned 19 just 2 days after we arrived. My sister had got her work on the local roadwork’s camp as a housekeeper. Cleaning was not something she was use to, however she enjoyed the work and the pay packet also… she too missed the city and the friends she once spent time with laughing and just hangin out with. She is now back in the city after the camp is now coming to a close.

My Mum took a fall on Good Friday. This was to be the start of a very emotional journey. Mum was hospitalized and a scan was done on her head, which she said she had hit in the fall… it showed a bleed between the brain and the skull. The doctors were concerned as she was taking blood thinners because of the stents she had just had put in, in February this year. The doctor took her off the blood thinners as he said it would help reduce the bleed, however her heart doctor after taking everything into consideration decided it was best for her to still be taking the thinners as if she didn’t the blood would thicken and clog up her stents… A catch 22 now with the bleed in Mums head still growing larger. We were in constant contact with Mum, speaking on a daily basis. Her health started to suffer, she was difficult to wake, she had pain in the head. The doctors said there was nothing more they could do. It was just a matter of time and Mum was moved to palliative care. She was going to die. My sister and I decided we should head to Bundaberg as soon as we could. We both needed to see her and have time to say our goodbyes. So we packed quickly, we would drive as far as we could that day. We wanted to get there ASAP, but we had to rest by nightfall. We were exhausted physically and mentally and needed to stop and then continue on the next day.

Arriving at the hospital the following day had us finding Mum in a coma. The thoughts in my head were ringing out ‘ Please mum, wake up’ I’m not ready for you to go… there is so much I want to tell you… so much I want to say, apologise for… The head nurse told us that mum could still hear us and that the last two senses to go were hearing and touch. We sat with mum each on our own, saying the things that we needed to share with her… the last goodbyes, the love we wanted her to know we all had for her. Our other sisters arrived and as we hugged we all felt a deeper connection than ever before. Here was our mum lying there in a coma waiting to die. There was nothing we could do now but pray and spend as much time together as we could. Family was everything to mum. Our brother came to the hospital also. Together we would all talk about the past, the things we knew mum liked to talk about. We sang to mum, hymns and those songs which were her favourites…  we rubbed her in with moisturizer, her arms and legs, we made sure her hair was done. Her skin was like that of a baby, her face losing all the wrinkles of laughter and pain. She looked beautiful and at peace. Everyday we visited with her. The doctors had taken her off all medication, off all drips. It was now just a matter of time. The emotions were hard to contain, many tears falling. Watching our mother slowing die, never to speak with her again, never to receive that weekly phone call to see how we are all going, never to taste the cooking she made with love and never to say I love you and hug her. How would we cope? It was 9 days since she had eaten or had any water intake. How long could she hang on for? It was a Friday, we had all decided to meet for lunch together. That’s when we received the phone call. Mum was gone. Peacefully she had slipped away when we weren’t there. Tears fell.

It was 10 long days before we could lay mum to rest. The doctor wouldn’t sign off on the death certificate…

he wanted to send mum for an autopsy. What the heck, she was 87yrs old. Please do not put our mother through this, I thought. After many phone calls to the coroners office and mums medical records being sent to Brisbane the death certificate was signed and we were allowed to finally lay mum to rest… these were very emotional times. Two of my sisters started baking; they wanted to have home cooked slices, biscuits and cakes at the wake. Mum had been such a good cook throughout her whole life. Another sister and I said that we would do the flowers for the funeral. Having been a florist for many, many years it was only fitting that we did this as mum loved her garden and flowers and had even worked for me in my florist shop and had won many prizes for her entries of cooking and flower arranging in many shows. We each wore a hat that mum used to wear to church every Sunday. I know she would have been proud of us all. The service was really lovely and many family and friends attended. Saying goodbye to mum was one of the hardest things I have ever done… knowing she is with the Lord helps me to cope.

Life goes on they say… and yes it does. However having lost both parents now has me feeling a little numb inside. The waves of emotion come, releasing of tears that I know its ok to do… feeling the love inside my heart.

I’m not sure where my life is taking me. For now my youngest daughter and I live out on the property. Unsure if this is where we are meant to be. It is teaching us to take one day at a time, to look for the good in all things, to dig deep and search out our hearts desires, to be patient and know that everything happens in the right timing.

I send love and blessings to you all. Thank you for being the beautiful unique person you are. 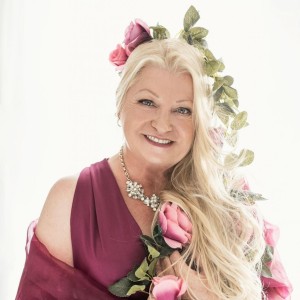 Feel free to get in touch with me.

Please log in again. The login page will open in a new tab. After logging in you can close it and return to this page.